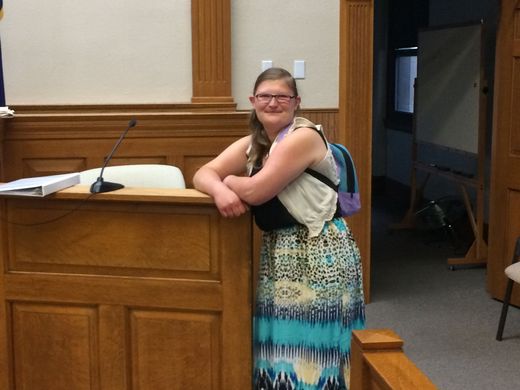 She lives in a Muncie apartment with a housemate, following and enforcing rules, cooking and cleaning.

Now, the 28-year-old has regained the legal right to make her own decisions.

“Yay. It feels pretty awesome,” Beck said when asked how she felt after the hearing attended by about a dozen supporters for her historic moment. “To be able to make my own choices with help is really great.”

“Jamie, it’s been an absolute pleasure to get to know you and to follow you,” Horn said. “I’m glad that you’re the first one, and I wish you all the success in the world.”

Under the Supported Decision Making agreement, Beck, who will still receive Medicaid waiver services to make sure she is safe and thriving, selects a team to assist her and determines how they will advise her in area such as finances, healthcare, legal matters and housing, much like parents, family members and friends do for just about anyone making important life choices. In the end, though, the choices now are legally hers, which she said isn’t the least bit scary. 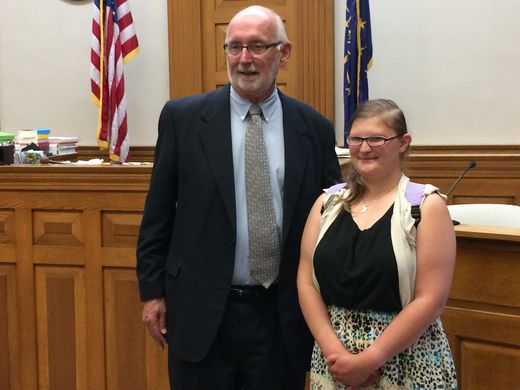 Jamie Beck poses with Dan Stewart, who has been her legal guardian, after a hearing that terminated that guardianship and approved Beck’s Supported Decision Making agreement.

Achieva and Stewart became guardians for Beck seven years ago when she was left without any known family. Her mother had died in 2009, and her stepfather, with whom she’d been living in Economy, died in 2012. Beck, who had been found wandering around Economy, was placed in a nursing home temporarily until Achieva could receive guardianship and move her to a Supported Living Home in Richmond.

“She’s truly remarkable,” Stewart said. “Watching this girl develop has been so cool.”

Stewart, Angela Blevins of Achieva and Karen Fisher with Indiana Professional Management Group, who serves as Beck’s case manager, all testified that Beck was ready and deserving to regain her decision-making capacity. All will continue to assist Beck.

“Jamie has gone from a child who came out of high school to an adult,” Blevins said.

Fisher said she has “seen her grow tremendously” and has watched Beck take on every challenge presented to her.

Beck, who received a Certificate of Completion from Hagerstown High School, worked in Benchmark’s Workshop to earn some money. Stewart said she came to him wanting more, however, and sought a community job, a search which proved frustratingly difficult while applying to about 40 places. After an appearance at a Common Council meeting to explain her plight, she provided her resume and was hired the next day by Pizza King. In addition, Stewart said, Beck volunteered, then was hired, at the Abilities store.

After saving money from those jobs, Beck yearned for different work. She completed the 13-week environmental studies program at the Erskine Green Training Institute in Muncie, which provides vocational training for individuals with disabilities. Beck was immediately hired after she completed the program and began work May 21, a week after she moved into an apartment close to the hospital.

Beck said she cleans hospital rooms, sometimes an entire floor, and can earn a meal ticket from her boss if a patient compliments her work. She said she likes the job and living in a new community.

“I’m just very proud of her,” said Stewart, who is retiring from Achieva on June 29. “She is a remarkable human being, and she is setting the bar for others.”

Wayne County’s pilot program began with a grant from the Administration for Community Living and Indiana’s Working Interdisciplinary Network of Guardianship Stakeholders. Stewart said a second pilot program is beginning in Monroe County.

“We’d like to see it in every county in Indiana in the next two years,” he said.

“We are pushing to enact Supported Decision Making here in Indiana and have it recognized as a tool to use when planning for futures,” said Keyes, who acted as Beck’s attorney during Wednesday’s hearing. 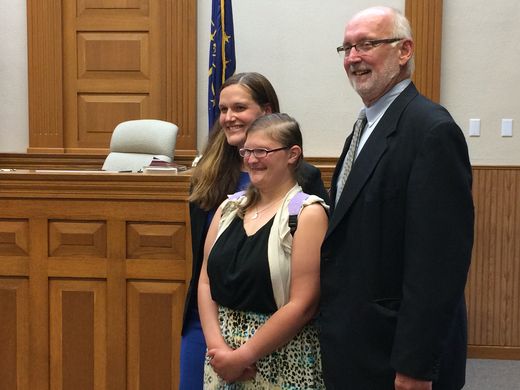 She said Wednesday’s hearing was “incredible” for advocates of the program, including those who gathered in the courtroom to congratulate Beck, posing for photos and supplying a cake. When asking Horn to terminate Beck’s guardianship, Keyes said it “would be an historic first for the state of Indiana.”

Horn, who also posed for pictures with Beck after the hearing, said he was proud to be a part of the program’s initial step.

Beck, though, proved to be the exception. She has a fiancé, Kevin Glenn, and wants to expand her YouTube channel that features live game play and achieve more through her Special Olympics involvement. As much as Beck likes her job, she plans to stay at the hospital and in Muncie, experiencing her new surroundings.

“I haven’t seen everyplace around town,” Beck said. “I want to see places.”

“I can set an example,” she said. “I can help somebody out, and they can get to that point.”

This article was written and published by Pal Item. https://www.pal-item.com/story/news/local/2018/06/13/jamie-beck-makes-state-history-1st-regain-decision-making-rights/698874002/