As published, 9/12/16, in The Jewish Week Special Section: 2016 Ruderman Best in Business Awards 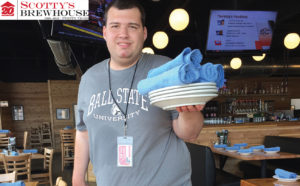 Scott Wise is celebrating his 20th anniversary as a restaurant owner this year. His professional journey has taken him from opening the first Scotty’s Brewhouse in Muncie, Ind., to operating 15 restaurants across the state and also in Florida, with continued plans for expansion.

While Wise’s professional life was certainly a success, he marks a change in his emotional and spiritual life that happened four years ago, in 2012, when he contracted viral encephalitis, a brain infection that took him very close to death. When Wise recovered from his illness, he emerged with a new spiritual and emotional perspective on the meaning of his life. “I decided that God’s mission for me on Earth was not just to open restaurants, but to use the platform I was given to do good in our world,” he explains. “To inspire. To lead. And, to help others.”

Wise and his management team created a two-sided card to share with every employee each day of work. One side states, “I will work hard and make __________ proud today.” On the other side of the card were lines that Wise modified from Robert Fulghum’s classic, “Everything I Need to Know, I Learned in Kindergarten,” blended with some of his own uplifting messages: Be kind to others. Clean up after yourself. Lend a hand to those who need it. Make a difference and a mark in our world. Do some kind of philanthropic work every 90 days: Donate your mind, body and soul.

Word spread in the community about the positivity at Wise’s restaurants. Staff from the Arc of Indiana, an organization that for 60 years has been committed to all people with intellectual and developmental disabilities realizing their goals of learning, living, working and fully participating in the community, reached out to Wise with an idea. They asked if Wise would be open to hiring people with intellectual disabilities who had been part of their vocational and job training program. Wise was game, though he wondered how his employees and customers would react.

“I clearly was not giving enough credit to the hearts of others,” Wise recalls, when remembering his initial hesitation about hiring people with disabilities. “Because our team members rallied behind our employees with disabilities. They protected them. They shared with them. They helped them. They laughed with them. And, they cried with them.” Wise notes that the appreciation of his employees with disabilities extended to his customers as well. “We have an employee at one of our restaurants named Kelly, who has Down Syndrome. This girl has the best smile and personality. Our guests love her so much because she is filled with “hugs” for kids and “high fives” for moms and dads. She showed me last week a $10 tip she received.”

In addition to contributing to a positive culture in his restaurants, hiring people with disabilities has been an excellent business choice for Wise. Normal employee turnover in Scotty’s Brewhouse opening saw an early loss/attrition rate of about 35 percent. When Wise would open a new restaurant with 150 people, he would expect to end up with about 85 of those employees staying on after the first month of business. Training new staff is a tremendous expense in terms of time and resources. However, after starting to work with the Arc of Indiana, Wise’s attrition rate reduced to 3 percent or about 5 people.

Wise appreciates this enormous financial bonus for his business — but he encourages other companies to pursue inclusive hiring because it is simply the right thing to do.

“There are tears that we see when an employee with a disability is given their first paycheck, or told ‘you are hired!’ or even given their first uniform. …You are met with such incredible excitement and smiles. It is so beautiful to see that kind of appreciation from someone — it is a true testament of ‘thank you for giving me a chance, I won’t let you down.’”

Currently, 3 percent of Wise’s total workforce of 1,500 employees is made up of persons with disabilities. He plans to increase this number to 10 percent by the end of 2017.

Scotty’s Brewhouse honored for hiring, employing those with disabilities

WTHR: Scotty’s Brewhouse honored for work with people with disabilities